The conference is going to take place in the Polish Parliament (Sejm) on 17 June. The title of my presentation is: “Germany’s Scenario and Prepartion in Case of Global Energy Crisis” (in Polish: “Scenariusz i przygotowania Niemiec na wypadek (globalnego) kryzysu energetycznego”).

Here is more information about the conference.

Here you may watch the press conference that too place before the conference.

Here you may watch the video taken at the conference and the panel discussion. 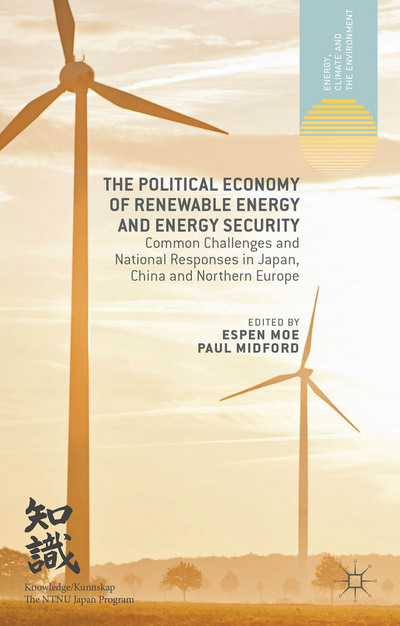 From the book description:

Bringing together renewable energy and energy security, the authors cover both the politics and political economy of renewables and energy security and analyzes renewable technologies in some of the most relevant and topical parts of the world. Japan is energy-scarce and still experiencing the aftermath of Fukushima. China is expanding its renewable energy capacity faster than any other country. Northern Europe has long been among the most progressive regions with respect to renewables – boasting Denmark and Germany, front-runners in wind and solar energy solutions – but also home to petroleum-based economies like Norway. By comparing and contrasting the experiences of such a diverse range of countries, this book identifies both barriers and success factors and explains why some countries have been so much more successful than others when it comes to renewable energy.

More information available on the website of Palgrave Macmillan.

Presentation from the Intensive Programme of the MA in Euroculture “European Environments: How a New Climate is Changing the Old World”

The power-point presentation (in English) entitled “Bringing energy to the people – what Poland, Europe and the world really need?” that I prepared for my talk during the panel: “The Climate of European Politics: Climate Change, Europe and the World“ during the Intensive Programme of the MA in Euroculture “European Environments: How a New Climate is Changing the Old World” on 23 June  in Cracov is available here:

Presentation “Bringing energy to the people: what Poland, Europe and the world really need?”, Karolina Jankowska

In August I start working for the Pirate Party’s parliamantary group in the Berlin Chamber of Deputies as a scientific assistant for energy policy, with focus on the Enquete-Commission “Neue Energie für Berlin – Zukunft der energiewirtschaftlichen Strukturen” [“New Energy for Berlin – the future of the energy industry structures”]. I am so excited about the challenge we are going to handle in Berlin – transition to renewables and more energy democracy! I hope for a good and fruitful cooperation with all involved in this process! I will publish soon more information about my new work and the work of Enquete-Commission.

Here my contact details in the Berlin Chamber of Deputies.

Speech during the Intensive Programme of the MA in Euroculture “European Environments: How a New Climate is Changing the Old World”

The Intensive Programme of the MA in Euroculture ”European Environments: How a New Climate is Changing the Old Wolrd” is going to take place at the Jagiellonian University in Cracov from 22 to 29 June. I am going to give a speech during the opening panel: “The Climate of European Politics”. The title of my speech is: “Bringing energy to the people – what Poland, Europe and the world really need”.

Some European states and the European Union are widely seen as leaders in global environmental issues. Various European states have gone furthest in moving toward sustainable energy policies; EU environmental standards are among the most stringent in the world. But the politics surrounding climate change are highly complex. Within Europe, there are wide differences among European states’ responses to environmental change, and in how voters and political leaders perceive the issue. Increased public awareness of the dangers of climate change does not seem fundamentally to have changed voting behavior on the national or European level. On the global level, complex issues of political, economic, and soft power make it unclear whether the EU is really able to offer global leadership in promoting sustainable development.

Here students are invited to explore the issues and themes in which European integration, international politics, and global environmental issues meet and intersect. How does climate change affect the EU’s relations with, for example, China, Russia, Brazil, or the United States? How is the warming of the Arctic (raising the prospect of ice-free summers in the near future) affecting European energy, security, and trade policy? Are there European success stories like international cooperation in cleaning up the Rhine, or the development of European emission standards that can inspire transnational environmental cooperation elsewhere? Or does Europe’s current crisis undermine the Union’s ability to take up a leadership role? Does the rest of the world even want such leadership? Within the EU, can environmental crisis be a force that deepens European integration, or only a further strain on the Union? How, for example, will the EU respond to the expected influx of so-called climate refugees, driven from their homes by rising sea levels or desertification? What links Europe’s financial crisis and the crisis of European institutions to the problems of climate change? Could so-called ecological economics offer fresh solutions to the crisis of the eurozone? Finally, how can we best understand the interplay of local, national, European, and global forces that drive European governments’ responses (or lack thereof) to ecological concerns?

More information about the conference as well as its programme are available on the website of the Intensive Programme of the MA in Euroculture.