Report written by myself and Corina Bolintineanu “Flexibility Technologies and Measures in the German Power System” was published in January this year. The analysis was published by the German Energy Agency (dena) in the framework of the Sino-German Energy Transition Project led by the Deutsche Gesellschaft für Internationale Zusammenarbeit (GIZ) [German Society for International Cooperation] GmbH . The project supports the exchange between Chinese government think tanks and German research institutions to strengthen the Sino-German scientific exchangeon the energy transition and share German energy transition experiences with a Chinese audience.

Here the Executive Summary of the publication:

“Germany’s goal of climate neutrality is just around the corner. In order to reach it by2045, Germany will need to increase its renewable energy production and,alongwith it, its power system flexibility. For the past decades, solutions have been developed and implemented, such as the establishment of market rules that enable competitionbetween flexibility measures, along with a technology-neutral approach that ensures a broad mix of technologies and participants.

On the way to a power system based entirely on renewable energy, conventional power plants, in particular gas power plants, will continue to play a role. Today, coal-and gas-fired power plants are the mostrelevant source of flexibility in Germany. However, the phase-out of coal-fired power plants by 2038at the latest,and of nuclear power by 2022 will lead to an increased use of other flexibility options.Large-scale batteries, which are a fitting solution for providing primary control energy and for industrial applications, and small-scale batteries,which provideuser-related flexibility in private homeswill play an increasingly important role.

Flexibility will continue to be provided by biomass-and biogas-operated andpumped-storage power plants, currentlythe secondmostimportant source of flexibility. In addition, technological development as well as the phase-outof financial and regulatory barriers, particularly the double burden requiring operators to pay consumer fees twice, may trigger the use of power-to-X technologies, which are not yet widely deployedin Germany.

Price signals on the wholesale market are expected to triggerhigherdemand-side flexibility in the industry and small and medium-sized enterprises. Residential demand-side flexibility will play a greaterrole withthe gradual introduction of intelligent measuring systems (smart meters) and other digital technologies.

Last but not least, system operation regulations will need adjustments in order to increase grid flexibility.

The report provides a detailed overview of the main flexibility technologiesand measures in the German power system. While it reflects the status quo, it alsoindicatesneedsfor thedevelopment ofthe power system to reach climate neutrality and providesvaluable input for ongoing policy debates.”

The report is available on the website of the Sino-German Energypartnership as well as on the dena website.

In the last couple of months I have been involved in preparing a report on the issue of land use planning for renewable energy. Dena’s colleagues have been working on this report together with colleagues from the Danish Energy Agency (DEA). It was a part of the joint project energy transition expertise for China CNREC. The report was launched yesterday at the China Wind Power Conference. It is titled: “Distributed Wind and PV in Denmark and Germany”.

About the report from its introduction:

“This report describes the current regulations in Denmark and Germany for land use and planning and siting of RE facilities, especially distributed onshore wind and free-field PV systems. In the first section, the status of both onshore wind power and PV in both countries is presented. Afterwards, the planning and siting processes as well as the approval processes for onshore wind farms and free-field PV systems are explained. In this context, it is important to note that, while Denmark is ruled by country-level regulation, in Germany the regulations for land use differ across the federal states, which have the power to issue own rules. The most important differences are briefly presented in this report. Afterwards, the public participation processes are discussed. Finally, lessons learned for China based on the Danish and German experiences with planning and siting onshore wind power plants and free-field PV systems are suggested.“
You may find the whole report here. 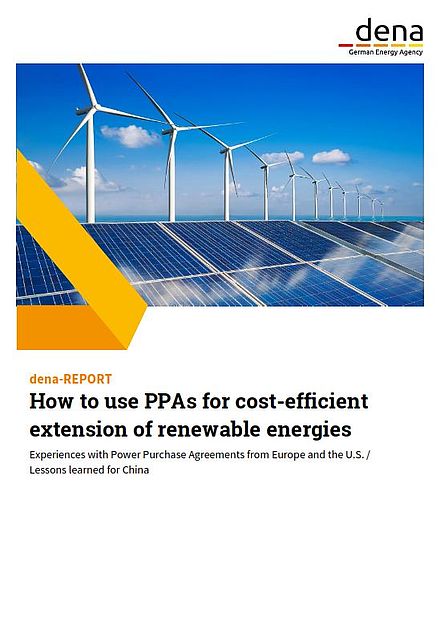 Dena’s report on PPAs and how to use them for cost-efficient extension of renewable energies, with some recommendations for China, is out! I wrote this report together with my dena’s colleague, Carolin Schenuit. Experts of the National Renewable Energy Laboratory (NREL) contributed to sections describing PPA practices in the U.S.

“A power purchase agreement (PPA) is a financial mechanism that allows utilities and corporations to procure renewable energy (RE) from producers with minimal to no upfront capital cost in order to meet their RE goals.

This report comprises a literature review on the evolving practices in PPA implementation in the U.S. and Europe, including PPA types, key factors enabling PPAs, as well as challenges and limitations associated with PPA applications. Built on the experience and lessons learned from the U.S. and Europe, this report sheds light onto feasible options that could be adopted by China to enable the implementation of PPAs for RE investments.”

You may find the whole report here.

From 27th to 29th of May I was a part of the delegation of the German Energy Agency (dena) to the 25th Energy & Environment Fair & Conference ICCI in Istanbul.

In 28th of May I took part in the meeting of the German-Turkish Working Group “Sector Coupling and Energy Infrastructure” with representatives from the Turkish Energy Ministry and gave a presentation on storage technologies in Germany, including large scale battery storage systems (BSS) and the concept of “Netzboosters” (grid boosters) (see dena’s Twitter below). On the next day I participated in the conference on storage technologies in Germany and Turkey with German and Turkish experts.Â

Both events were organized jointly be the dena and the German-Turkish Chamber of Commerce and Industry. It was a pleasure to be a part of the organization team as well as to share with the Turkish colleagues the knowledge about current situation and developments concerning storage of energy in Germany. I have also lernt a lot about the Turkish electricity system and the role of renewables. I am looking forward to the next meeting of the Working Group in Berlin! 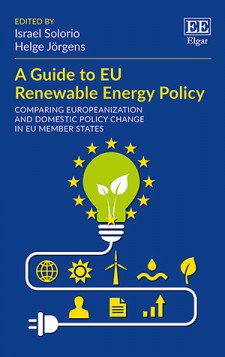 Mine and Andrzej Ancygier’s book chapter “Poland at the renewable energy policy crossroads – an incongruent Europeanization?” has been published in the book “A Guide to EU Renewable Energy Policy. Comparing Europeanization and Domestic Policy Change in EU Member States” by Edward Elgar Publishing (2017, pp. 183-203).